The JSC "Bashkir soda company" was established in May 2013 by joining of JSC "Soda" and JSC "Kaustik". Today JSC "BSC" is one of the largest chemical complexes of the country. 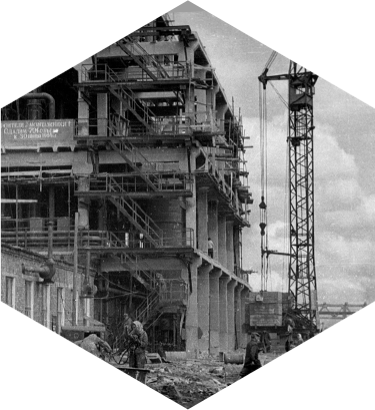 The thirties of the last century saw an urgent demand in soda ash and cement in conditions of expanding large-scale constructions over the country. Several regions were explored for placement of the future factories. Bashkiria was selected to be the most perspective region. In 1936 a group of explorers discovered Sterlitamak mountains Shikhans to have rich reserves of limestone which is the raw material for production of soda ash and cement. Furthermore during oil-field exploration around town of Ishimbay rich deposits of rock salt – second important component for soda production - were discovered.

The place for construction of Sterlitamak soda plant was selected in 1939.

Almost simultaneously, in 1946 began the construction of cement plant. First cement was obtained in April 1952.

All three plants – soda, cement and roofing slate plant – were bound with common raw-material base, single electricity, water and steam supply systems. On 1st July 1957 on the basis of these production sites the soda-cement plant was formed. From early fifties until now it remains to be the largest production plant in Sterlitamak.

In the sixties, construction of manufacturing shops for refined sodium bicarbonate (baking soda) and silica white. 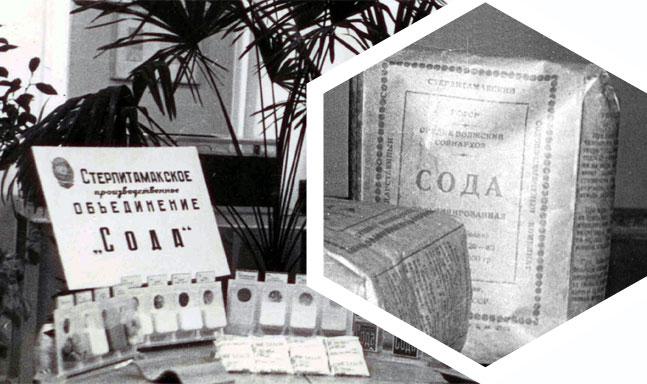 In the 80–90’s, construction of production line for synthetic detergents, commissioning of wall blocks production. Construction of manufacturing shop for silica fillers.

In December 1994, by the resolution of the Head of Sterlitamak local administration, the open joint-stock company “Soda” has been registered, which became a legal successor of the government-owned production association “Soda”.

The history of the plant “Kaustik” begins in 1955, when the USSR Council of Ministers officially decided on construction of chemical plant in Sterlitamak. The reason for such decision was the fact of presence of Yar-Bishkadak deposit of salt - main raw material for caustic soda production, as well as rich oilfields, the processed product of which  - ethylene – is utilized to obtain dichloroethane and on its basis of vinyl chloride and polyvinyl chloride.

The birthday of the joint-stock company “Kaustik” is considered to be 8 August 1964 – the day on which the Acceptance Certificate of the Sterlitamak chemical plant’s first production line was signed.

Hydrogen and chlorine are formed as by-products during electrolysis of salt solutions, therefore further development of the enterprise was concentrated on highest possible neutralization of chlorine aiming to ensure process and environmental safety. In 1966, commissioning of the production shop of polyvinyl chloride of 45.000 t/a capacity.

On 8th December 1976 the Sterlitamak chemical plant was renamed as production association “Kaustik”. Over this period production lines of chlorinated PVC, caustic soda according to the process of Oronzio de Nora, sodium hypochlorite shop, herbicide shop and organochlorine waste incineration plant were commissioned.

From 1982 till 1985, commissioning of manufacturing shop of cationic polyelectrolyte brand VPK-402, creation of a factory for manufacturing of optional equipment.

From 1985 till 1988 aluminum chloride, corrosion inhibitors series “Vikor”, polyethylenepolyamines production lines were commissioned. In line with the resolution No. 781 dd. 14.08.87 “On top-priority measures for protection of the environment of cities Sterlitamak and Salavat of Bashkir ASSR” production line of caustic soda and chlorine by mercuric method according the technique of company Krebs was decommissioned, the plant took ecological actions on demercurization.

In 1991 production association “Kaustik” was reformed into the closed joint-stock company “Kaustik”.

The construction of the soda plant began in 1941.

In 1956 Sterlitamak soda manufacturers came out to be on the 1 place in the USSR on soda production capacity.